Mega-Urbanization in the Global South: Fast cities and new urban utopias of the postcolonial state (Routledge Studies in Urbanism and the City Book 8) por Ayona Datta 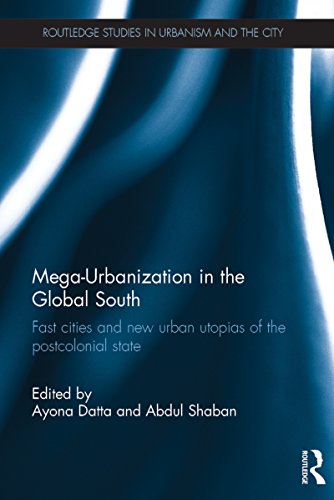 Ayona Datta con Mega-Urbanization in the Global South: Fast cities and new urban utopias of the postcolonial state (Routledge Studies in Urbanism and the City Book 8)

The global south is entering an ‘Urban Age’ where, for the first time in history, more people will be living in cities than in the countryside. The logics of this prediction have a dominant framing - rapid urbanization, uncontrolled migration, resource depletion, severe fuel shortages and the breakdown of law and order. We are told that we must be prepared. The solution is simple, they say. Mega-urbanization is an opportunity for economic growth and prosperity. Therefore we must build big, build new and build fast. With contributions from an international range of established and emerging scholars drawing upon real-world examples, Mega-Urbanization in the Global South is the first to use the lens of speed to examine the postcolonial ‘urban revolution’. From the mega-urbanization of Lusaka, to the production of satellite cities in Jakarta, to new cities built from scratch in Masdar, Songdo and Rajarhat, this book argues that speed is now the persistent feature of a range of utopian visions that seek to expedite the production of new cities. These ‘fast cities’ are the enduring images of postcolonial urbanism, which bypass actually existing urbanisms through new power-knowledge coalitions of producing, knowing and governing the city. The book explores three main themes. Part I examines fast cities as new urban utopias which propagate the illusion that they are ‘quick fix’ sustainable solutions to insulate us from future crises. Part II discusses the role of the entrepreneurial state that despite its neoliberalisation is playing a key role in shaping mega-urbanization through laws, policies and brute force. Part III finally delves into how fast cities built by entrepreneurial states actually materialise at the scale of regional urbanization rather than as metropolitan growth. This book explores the contradictions between intended and unintended outcomes of fast cities and points to their fault lines between state sovereignty, capital accumulation and citizenship. It concludes with a vision and manifesto for ‘slow’ and decelerated urbanism.This timely and original book presents urban scholars with the theoretical, empirical and methodological challenges of mega-urbanization in the global south, as well as highlighting new theoretical agendas and empirical analyses that these new forms of city-making bring to the fore.